How The Fox Got A Bushy Tail 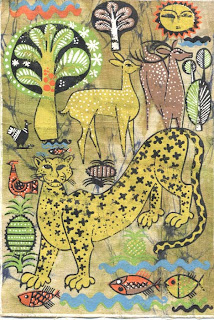 Surprised, Oh Best Beloved? I should say so! Me too. I have returned, but briefly, to tell you the story of how this came about.

Well, hear and attend and listen then, for this also befell and became and behappened and was. It's just that I forgot to tell you at the time.

Do you remember, Oh Best Beloved, the wild horse stamping with his wild hoof in the wild world saying, 'Oh my friends and Oh my enemies, why have the Man and the Woman made that great light in that great cave, and what harm will it do us'?

Those of you that had a proper childhood will remember this. The Dog thought it was good and was particularly attracted to the smell of roast mutton and offered to go and look and even asked The Cat to accompany him. The Cat, having more wiles than The Dog had the good sense to say: 'Nenni, I will not come. I Am The Cat Who Walks By Himself And All Places Are Alike To Me.'

All in turn and in good order, and despite Cat's misgivings, The Dog and The Horse and The Cow and The Sheep and The Pig and The Hen all gave of their wildness to The Man and The Woman in return for shelter from the bitter winds or a place by the fire and some scraps from the table or a nosegay of hay or some fresh pasture. And so it went.

Until one bitterly cold winter in the wet windy wildness when The Fox, hungry and cold, came to the door of the Cave.

'I am hungry and cold', retorted The Fox, 'can I not in turn make a deal with you as have The Dog and The Horse and The Cat?'

'What have you to offer?' asked The Woman doubtfully.

Fox scanned the comfy looking cave with his wishful wiley eyes. He saw the warming fire and the sheepskin rugs spread before it; he saw the salted hams hanging to dry from the ceiling and licked his lips; he saw a rack of big brown eggs on a rock ledge; he saw the baby teasing The Cat with a ball of wool and laughing delightedly; he saw an IKEA flat pack lying unopened on the cave floor.

'Hmmm.' mused The Fox. 'Maybe I could help you put that together?'

'Oh really!' Exclaimed the women. 'Using your tail as an Allen key I suppose?’

'Well, what do the others do then?' queried The Fox, shaking the icicles from his fur.

'Horse and Dog help The Man hunt; Hen lays the fine fresh eggs; Sheep gives us the curly wurly wool to clothe us from the wet windy wildness and keep us warm at night; Cow gives us the wonderful white milk to grow the baby and make Wensleydale; Cat makes the baby laugh but he is allowed to Walk by Himself.'

‘As I said to The Cat,’ continued The Woman, ‘go back to the wet wild woods for we have no more need of friends or servants in our cave.’

‘I am neither friend nor servant,’ said The Fox, becoming angry. ‘How are you off for enemies?’

‘Are you threatening me?’ Asked The Woman with a glint in her eye.

‘I was told you were wise and beautiful,’ said The Fox, ‘beautiful you most certainly are but I am not so sure about the wise bit.’ ‘At least you could let me have a bash at assembling that flat pack.’

‘Go on then,’ replied The Woman, taking her magic blade bone from a shelf. ‘I hate putting those things together.’ ‘If you succeed you may sit with The Cat by the fire drinking the warm white milk, if you fail, you must return to the wet wild wood forever.’

Do you see, Oh Best Beloved? It was hardly fair. The Fox tore the box to bits but then the diagrams were really complicated and the retaining bolts would not line up properly and some of the holes were in the wrong place and indeed, handling an Allen key with teeth or tail is Just So.

After a time The Fox admitted defeat and The Woman held the magic blade bone and made the singing magic once more to return The Fox to the wet wild windy woods forever and ever.

The Fox became extremely angry at this and, because he was still hungry, snatched the Fat Hen between his teeth on the way out. The Woman saw this and, dropping the magic blade bone, she flung herself forward and grabbed onto The Fox’s tail as hard as she very could. The Fox pulled and pulled, Oh Best Beloved, as best he could and The Woman held on tight as tight as best she could and to this day, you will see that the tail of The Fox is all bushy at one end and this is because The Woman held on so very tight while The Fox pulled his hardest. 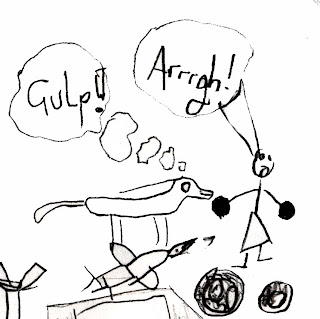 At length, The Woman was obliged to let go and the bushy tailed Fox ran swiftly towards the wet wild wood.

‘We are enemies forever!’ Shouted The Woman after The Fox. ‘Forevermore will Man and Sons of Man and Dog and Sons of Dog and Horse and Sons of Horse hunt you down and chase you until an unspeakable death shall befall Fox and Sons of Fox…..at least up until the Labour Government’s Hunting Act of 2004….a long way off mind you.’

Fox stopped by the edge of the wet wild windy wood and dropping The Hen for a moment, screamed back. ‘So be it, henceforth shall Fox and Son of Fox kill not just the one to sate our hunger, but ALL that we are able to kill that live in the light of your cave…...and the Hunting Act of 2004 won’t make one jot of difference….hah…..ner ner ne ner ner!’

And thus it was and so it has been ever since Oh Best Beloved. Do you see?

Before I go though Oh Best Beloved, I must tell you that it is really no inconvenience whatsoever being dead. Honestly, you hardly notice it. You should not fear it so.....really! 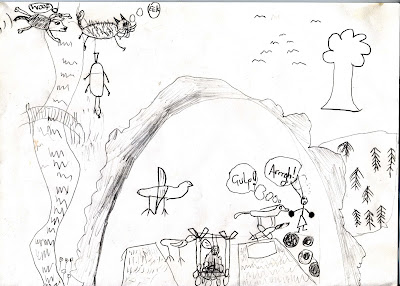 (Ben: This is a picture of the cave and the animals in the story. Inside the cave you will see baskets with eggs in. Above that there is the woman shouting at the fox with the dead hen by his feet. The ham is dangling from a long pole above the fire - the problem is, the woman couldn't find long enough sticks with Y shaped ends, so the ham is dangling too low on the fire.

The flying chicken is about to try to roost on the bar hanging across. You will see the dog chasing the cat over the river and knocking over the poor cow who is trying to graze.

Next to the cave is a small patch of plants the woman has planted. The bumpy bits round the cave are rocks.)

Posted by clodhopper at 8:50 pm

Thank you so much Helena.

I was beginning to think there were no Kipling fans left anymore in the wide world. Either that or it was just rubbish.

Well it may not be politically correct but I love Kipling's work and my brother is an even bigger fan.

I think you caught the tone of the Just So stories beautifully - the Cat who Walked by Himself is an especial favourite of mine.

Ahh yes, I know Helena - all about this PC business and why Kipling is frowned upon in some quarters - but when you have reached the half ton, I believe you are entitled to throw political correctness out of the window in favour of some robust free speech which, I think, is also healthier.

That's going to be my excuse anyway.

EDIT: And....the editor of the Kipling Society Journal has just offered to publish How The Fox Got A Bushy Tail, and my ego is now so inflated there is no room for political correctness anymore!

quite rightly so! Great going!

That was marvellous! I've always been a big fan of the Just So stories (PC be damned)- so much that I once memorized How the Elephant Got His Trunk. You really did catch the tone.

Caudi: Thanks, I'm glad you enjoyed it.