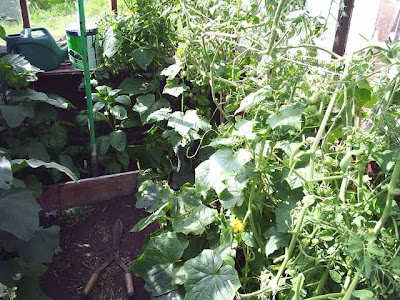 We got the second plot fairly well into the season and by the time the derelict greenhouse had been brought back to life it was really a bit late to be planting stuff. Never mind, ever the optimists we bunged in some tomatoes, cucumbers and peppers and they are doing well. The cucumbers are lovely but there may not be enough hot sunshine left to ripen the tomotoes up; it may have to be another batch of green tomato chutney.
Posted by clodhopper at 5:26 pm No comments: 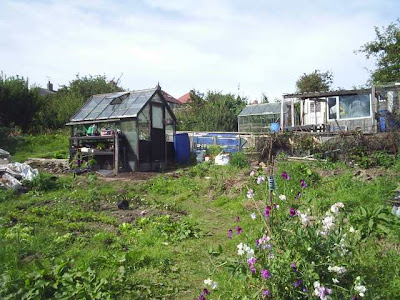 It's been a bit of a funny growing season to say the least. It hasn't all been doom and gloom up on clodhoppers by a long stretch but I confess to a nagging sense of dissatisfaction and unease about the year.

I'm sure a lot of plotholders have had it much worse in other parts of the country and I really feel for them, specially if they are gardening alone without much support which makes it so much harder to take the knocks.
Posted by clodhopper at 5:43 pm 4 comments: 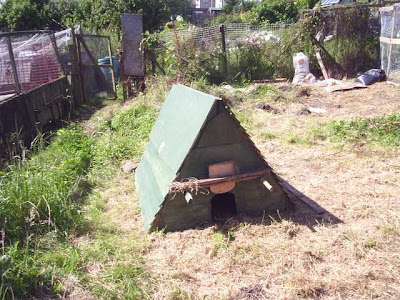 Spiller and Chirpy's 3* mobile home up on the allotment. But they've also now got a 4* shed with built in nesting boxes and enclosure with hot and cold running. 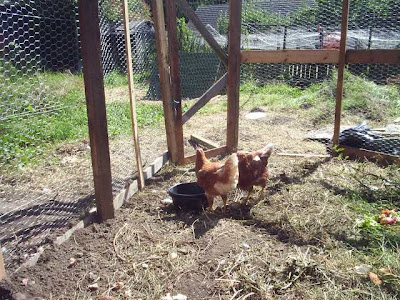 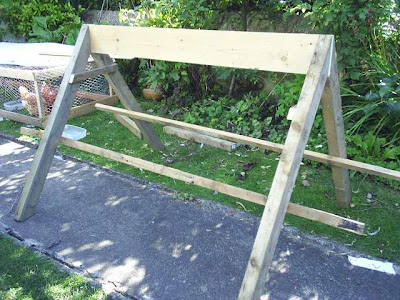 Spiller and Chirpy have grown so much now they are beginning to make a mess of the flower beds so we have started to build them a moveable ark ready to transfer them up to plot no2 on the allotments. We will re-jig the run so that it attaches on to the end of the ark so they can come and go as they please. While we were away they escaped for a few hours and were found in a neighbours garden surrounded by 3 cats but Spiller and Chirpy were holding their own in true teenage mutant ninja chicken fashion. But all in all, it will be better once they are ensconced in their new home up on the plots.
Posted by clodhopper at 7:02 pm 1 comment: 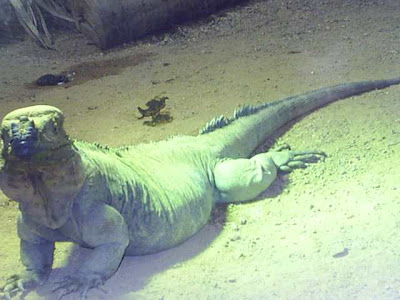 We decamped to Jersey to escape the interminable rain and it almost worked. Well, there was less off it anyway. I'd always suspected that I would find the channel islands rather insular and self obsessed and was not wrong. Some sort of victim mentality seems to have lodged in their souls, but dammit, it was NOT their fault that that shit-head hitler occupied them for five years was it?

Anyway, the two things I liked best about the Island in no particular order were Gerald Durrell's wildlife conservation centre and the remarkable Neolithic dolmen at La Hogue Bie.

I remember two thoughts when I first read Gerald's 'My Family and Other Animals' - lets just call it donkeys years ago - first was...You Lucky Lucky Sod! and the second was.... my mum's almost as mad as that, so why can't we go to Corfu too? But you can see why he devoted the rest of his life to wildlife conservation after a such a childhood can't you?
La Hougue Bie is one of those eerie places. Whoever the Neolithic bigwig was that built this one was definately bigger than my neolithic ancestor who built the one in our family name in Zennor in Cornwall which looks like a toilet by comparison. This one is 4 star bleedin luxury. 'Look at my Neolithic wad...losers.....all offshore dosh mateys!' 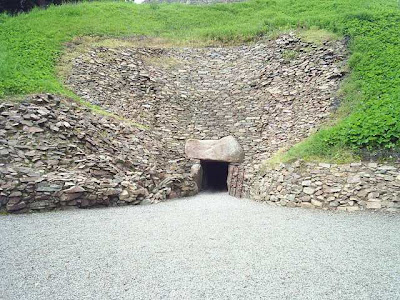 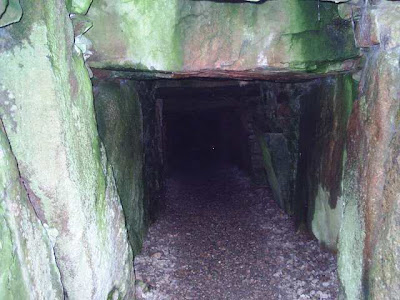 After the rather too tidy entrance, you have to lumber forward nervously and awkwardly into the darkness fighting off the claustrophobia and the oppressive weight of 5000 years of time and as many tons of stone, earth and rubble above your head, hoping the neolithic architects knew their stuff. 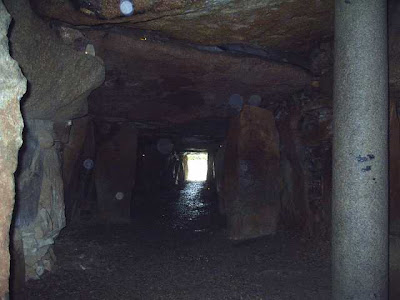 When you eventually reach the end chamber and can stand up straight once more and look back towards the light of the entrance you begin to get an inkling of just what a stupendous piece of work this is. The two side chambers when excavated in 1924/5 contained the remains of three women and five men along with some pottery fragments. There are some better pictures of the interior stonework here. 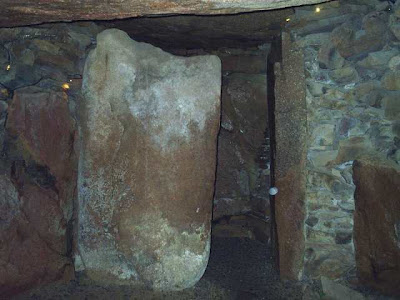 And a last one of the end chamber.

Slowly your eyes adjust more and more to the gloom but after a while, in the silence and the darkness, you start to feel a bit dreamy, a bit sleepy, and you're eyelids droop heavily and you think 'Wouldn't it be nice just to have a little lie down, just 40 little neolithic winks!'
Posted by clodhopper at 6:02 pm 1 comment: