Sunday pm. Went up to Miss Whalley's field at noon with Ben to help build the bonfire. carried dozens of pallets up the hill and stacked them till we had a bonfire 30 foot high! Others built a viking ship replete with portholes and sail and all outlined in fire rope or whatever the stuff is. neither the council nor the vampire developers can do anything with this piece of land because Miss Whalley donated it to the children of lancaster in her will for ever and ever and ever amen so the vampires can just fuck off. There are some developers who want to ruin the canal corridor (which is council ownded land) and stick up a fucking multistorey car park and a shopping development with a bunch of shops that we neither want nor need and ruining what could be a magical open space with all sorts of goodness done to make it even better council willing which they're not. I hate them and all their ilk.
Sunday 7.30. The fire is lit and flames shoot into the sky and you can feel the heat and we are standing a good 50 yards away. 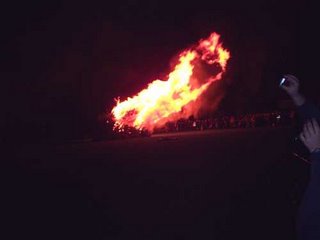 Kamal (from Turkey) is wearing a silly hat...we all are and we have eaten the parkin which was parkin good. I ponder as I gaze the mountainous flame the source of writers block which in my case turns out to be a catholic eejit of an English teacher and i can't even remember his name or how old I was but not very. anyway, the assignment was a composition and I wrote one about the aberfan disaster in wales when a school was buried by a mountain of mine tailings. many children and teachers were killed and the news affected me badly not because I had any particular connection with those children, teachers or that area but for some reason it just did and I decided to write about it. hands it in and said eejit calls me out in front of the whole class...
Teach: Who wrote this?
Clod: I wrote it.
Teach: Don't believe you. Where did you copy it from?
Clod: Nowhere, I wrote it.
Teach: Did you get it from a newspaper report?
Clod: No.
Teach: Who helped you then?
Clod: No one, I wrote it myself
Teach: You must've had help
Clod: No.
Teach: You must've. Who was it?
Clod: I didn't, no one, I......
....and so on for ten minutes or so till it got so upsetting and humiliating that I could've hit the twat or shouted out....oh all right then fucking aldous fucking huxley wrote the damn thing and are you happy now? but i didn't of course and it may be possible to discern that i am still somewhat angry about it. i wish the eejit would read this and then explode. anyway i was gazing at the huge flame and wondered why I still found it difficult to sit down and write the end of my story and i decided that was the reason and let's face it it's always easier to blame someone else isn't it? Jesus, why am I so angry today? Is it coz I got told off for leaving the marmite and the marmalade jars out on the kitchen table? could be....who knows?
Posted by clodhopper at 8:44 pm

Injustice rankles so much that we never forget it!