A Farwell to Nick 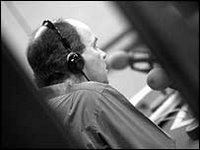 We say farewell then to Nick Clarke who died this morning at the age of 58. It's a bit like losing a family friend. For the benefit of readers across the ponds, Nick was arguably the greatest radio journalist of all time, respected alike by his colleagues, by all the politicians of whatever persuasion and beloved of millions of the radio listening public. His voice alone could melt the polar ice caps and yet he was so incisive and intelligent that even the 'big' politicians feared being interviewed by him. I have no doubt, that if there were a God, he would declare himself unavailable for comment at this time.
Posted by clodhopper at 2:28 pm