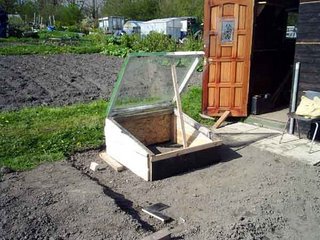 Hampered last week and this by a bad flare up of eczema on both hands which, frustratingly, limits how much I can do in the garden. We need to start clearing the greenhouse of seedlings so that we can establish the tomato plants but where to put all those pots & seed trays? So, (and it was probably silly given the state of my hands), on Sunday I turned one of good old Mildred's windows into the cold frame you see. That will help a lot, although spacewise, we could probably do with another one like that.

Ahhh, I see that camomile lawns (see last post) like acid conditions and hate clay. Maybe it's not such a good idea then. We would certainly have to throw in a lot of efficacious compound. Maybe it wouldn't take too well to the amount of traffic on it either? I don't know. Any ideas?

I notice on the path down to the poultry section of the allotments that there is lots of comfrey and nettle growing. I think it was a couple of weeks ago that Monty made a witches brew of liquid manure out of these by taping some pop bottles together and compressing the leaves in them to eventually release a concentrated liquid fertiliser. Never done it before & I bet it's a tad on the whiffy side. Still I have some old drainpipe left and my sinuses are stuffed anyway so...what the hell?
Posted by clodhopper at 7:19 am

Nice job on the cold frame. Meant to tell you after an earlier picture that I like that shed door! Hope the hands can be back in the dirt soon.