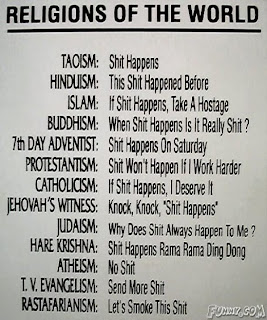 The thing about revelation is that it presupposes something to be revealed and someone to do the revealing.

You would have thought that in a series all about doubt that Richard Holloway would have examined this in great detail.

He doesn’t. Maybe he will return to it later, but what we were presented with in this episode was a rather shallow examination of revelation in the context of Judeo-Christian history and tradition rather than from a perspective of doubt.

Revelation is a powerful tool in the hands of narcissists and attention seekers and, to a great extent, religions are built on it.  The more dramatic and portentious the revelation, the better to pull in the frightened and the gullible.

1. The purpose of revelation is to make somebody else believe something.  Something that’s been revealed to YOU but not to them.

2. It relies on, and exploits, the existence of ignorance and the natural desire of humans to seek explanation.

Most of the biblical revelation reported by the profits comes in the form of auditory or visual hallucination, interpreted dreams or some form of ‘spiritual experience’ or a combination of the above.

So, now you are speshul, you can go full steam ahead and claim anything you want because the speshul stuff cannot be subjected to independent verification.

That this is so is born out by the fact all religions have their ‘revealed’ content and that all of it is contradictory and all of it can be conveniently ‘interpreted’ to fit an agenda.  Because all religions are essentially involved in the same line of business, you find them cooperating at a superficial level to bolster each other up.  But once doctrines lock horns, blood will be spilled.  You don’t need revelation to know this.  Revelation is just as explosive as e=mc2.
Posted by clodhopper at 3:20 pm