His thoughts tumbled in his head, making and breaking alliances like underpants in a dryer without Cling Free. 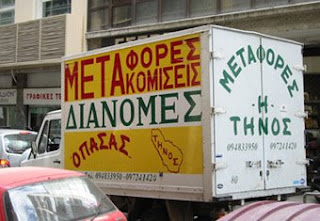 I see the white vans passing from the city out into the dusty countryside; past the olive groves and the goats looking up, their bells tinkling. The vans, the Metaphores, carrying the meaning of peoples lives in the chairs and tables and tv sets and cd racks and knives and forks and sofas and beds piled up higgledy piggledy in the back.

For that is what metaphor means: to transfer; to carry meaning. Our language is riddled with it and it rattles around like a skeleton in the cupboard of our vocabulary. Once, the words and phrases, these metaphoric skeletons, had flesh too: they meant something in the culture in which they were created, and everybody understood it.

In the busy dockyards of England where they built the great fighting ships for Drake and Nelson, the workers were allowed to carry home off-cuts of wood, not above a yard long, to fuel their home fires. The port authorities became suspicious that workers were taking timber that was far more valuable than just firewood and they stopped the practice - which the workers had come to view as their 'right' - every job should have a little perk, no? The workers were incensed and felt huge resentment that this boon was taken from them, so they downed tools. The bitter disputes were eventually resolved by the authorities reinstating the practice, but the workers had to walk out of the dockyard gates with the timber carried very visibly on their shoulders so that it could be seen not to be above a yard in length. They deeply resented this lack of trust but had to grudgingly comply if they wanted to take any wood home.

This is where we get 'he has a chip on his shoulder' from. The metaphor is a skeleton which once had flesh. Though the flesh has long since decayed, we still understand the meaning very well. But therein lies a problem. Though it enriches our language and transfers meaning well from one generation to the next, unless we understand the cultural context in which it was created and unless we appreciate that the language should not be interpreted literally, (eg in the way that Christian fundamentalists do it), then we can run into great difficulties because culture changes so dramatically over time.

Lets say we've dumped ten thousand tons of high level nuclear waste with a half life of 25,000 years. Lets say in that time that a catastrophic event takes mankind back to year zero and it takes ten thousand years to recover. In that time, the language, the written word, may change utterly and completely beyond all recognition. How can I convey to my great great great great great great grandson not to go digging around on that particular clump of our wonderful planet.

I haven't got a clue, and though it's brass monkeys out there, the sun is shining and the world has a soft blanket of snow, like glitter on a party dress, and I have an apple tree to prune and two to plant; chickens to feed whose knickers I will not count until they are washed.........er!
Posted by clodhopper at 9:57 am