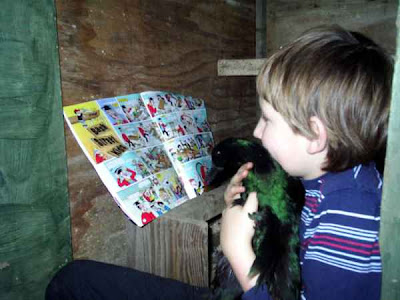 I probably forgot to tell you that the East Indian Black ducks are called WaddleYouDo and WaddleYouDont.
Ben likes to give them a cuddle when we go up to put all the girls to roost for the night. Thursdays are especially good because it coincides with the Beano coming out and WaddleYouDo seems to enjoy having the Bash Street Kids read to her though I am not convinced she understands it. I'm not sure I do either, but thats another matter.
Today when I went up the place was crawling with police because 15, yes Fifteen sheds were broken into last night. The crawling with police bit was a bit of an exaggeration, but the 15 sheds bit sadly wasn't. The week before they'd done Tommys shed and got quite good pickings, chainsaw, tools, gas bottles and burners etc and presumably decided that it was worth a second run. Tommy had a clock in his shed which they knocked off the wall and it stopped at two something in the morning so it seems clear to me that it's deliberate targetted thievery and not just local youth killing time. The second attempt seems to confirm that. Apparantly though, they didn't get all of the booty away as a pile of strimmers and stuff was found stashed over the fence; the main gate is hard to get through which gives the only convenient road access. Most of the sheds on the path behind ours were done; they are furthest away from the overlooking houses and tell-tale lights (but who's going to be looking at 2am?). They left our shed alone thankfully and the people that thought I was being extravagant putting on a solid front door (scrounged from our neighbour), and put a five lever lock on it rather than a padlock and hasp can now eat their thoughts. Not that I feel smug about that.....obviously not.
Posted by clodhopper at 1:37 pm

I'd forgotten all about the Beano - used to buy it when I was little, somehow the fact that it's still being published and read by the youth of today makes the future seem an awful lot brighter!

Glad you didn't get burgled - but very sorry the rest of the allotments did... (mum's just taken on an allotment so I'm sort of an allotment owner by default now...despite the fact it's over a hundred miles away)

Accoding to good 'ol radio 4. When Hitler was drawing up his invasion plans he had a hit list of people to arrest which included all the editors of the major newspapers + the editor of the Beano! This was presumably because during the war years the Beano poked merciless fun at Hitler and all his cronies and had a readership of 2 million + so, if all our other defenses had've failed, the Beano readers would've risen up en masse and sent the eejit packing. Gnash Gnash.

What's a hundred miles when you need a leek?

As to the brglary, you can add another six sheds on the Shrewsbury road plots + two houses and the corner shop all done over. It's a bleedin crime.wave....