Recent BBC reporting on the Irish Parliament's reaction to the Cloyne report simply do not capture the determination and strength of feeling among the Irish to confront the Vatican's non-compliance and prevarication child protection legislation. The Irish PM's recent statement in the Dail captures this so I've extracted it as an mp3 audio which is here if you want to listen to it.


Given everything else going on, I suppose it's not very surprising that it's not higher up the news agenda. But what I find interesting is the contrast to be made between the phone hacking scandal where people are getting arrested, high ranking police officers are resigning, CEO's and chief executives are getting grilled in front of parliamentary committees and a raft of public enquiries are instigated all because of shennanigins in the media and the met. As opposed to the response to an organisation corrupt to its very core engaged in active cover ups of its criminal activities carried out over decades in which its employees destroyed the lives of thousands upon thousands of children and which STILL responds with denial, prevarication, obfuscation and a generally self protective modus operandi. How do they get away with it? Why do we let them?

EDIT: An organisation accrues so much power, over a sufficiently long period of time, and there develops a culture where the organisation begins to think it's above the law and accountable only unto itself. So, for Canon law in the church, you could substitute Wapping Law, in the Murdoch empire - a culture in which any wrongdoing/lawbreaking is to be reported, and dealt with, [read - mangaged away], internally only, with the priorities being the survival of the organisation and the insulation of the heirarchy from any meaningful accountability ie something more than an insincerely mumbled 'sorry'. It will be made very difficult for anyone to operate within the organisation without toeing the party line and there will be very harsh penalties for anyone attempting to do otherwise. It's hard to break such cultures when they become that powerful, but their fall from grace can be a fairly rapid, spectacular and dramatic event,if it ever happens.
Posted by clodhopper at 9:43 pm No comments: 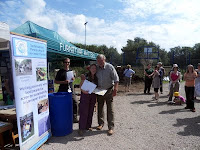 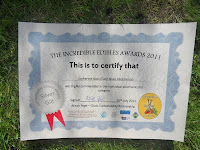 In which clodhoppers wins second pwize in a booty contest of local plots and Cathy gets to cuddle fairly famous local gardener beefy Bill.

Our allotment friend and neighbour Holly made a mini-garden and she got first prize for that too! 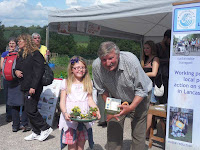 We gottid a £3 seed voucher so we iz stinky rich and well famus to boot.
Posted by Maurice Pennance at 5:10 pm 2 comments: