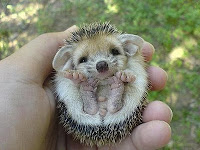 I expect the annoying clatter of glass, or the grumble of wheely bins being pulled by grumpy men in flourescent jackets in cobbled back alleys every other tuesday morning. It's nearly light at 7 now: not enough for the world to have colour, but enough for it to be washed in grey.

The neighbour knocks. She is worried the slate on the kerb is from her roof. I tell her it isn’t (because it’s from ours :-(). She is old and has those eyes that always look puzzled and afraid at the same time: because the world no longer makes any sense and she doesn’t know who to trust or listen to anymore. She won’t take any advice anyway because she wants her own control of the world back. It must be so frightening to lose your grip like that: for the world and its meanings to draw in and become incomprehensible, till your safe world shrinks to the boundaries of your own house, and then things, even in that world, no longer seem to make sense: the tv remote, the combi boiler, the washing machine, the fuse box; all a mystery, a hopeless mess of fiddly incomprehensible buttons. Mastery of your place is a big part of who you are. If I wasn’t in Lancaster among familiar things, I wouldn’t know who I was either this morning; my head is a fog of headache and cotton wool struggling to behave like proper neurons. This is not good.......

Today they will pretend there is a leak at the power station; people will talk earnestly into radios - in studiedly calm voices - and assure each other that all that can be done is being done. The public will ring and ask me what to do…and I will feel like telling them. Men will be placed on standby, as the pretend radioactivity drifts north towards sheep; their jackets will already be fluorescent, as, shortly, will be the sheep. Hey Ho…..
Posted by clodhopper at 6:42 pm 1 comment: