The week Lancaster City Council learnt that the capital of Iceland is not Reykjavik, it's about £3.50
Posted by clodhopper at 9:52 pm 2 comments: 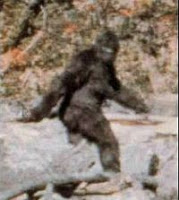 Bigfootitis? Well, it involves being chased around the grounds of a Silesian Sisters nunnery by groups of children demanding to be given one of the three magical ingredients which, when mixed into a potion with the correct incantations, can cure this highly contagious condition. Alternately Bigfoot is either friendly and helpful or mean and surly and sets challenges for the groups to complete, in return for which, they are given magic shiny buttons. Other helper/challengers roam the grounds and can be approached to give challenges in reward for more shiny buttons. When a group has garnered twenty buttons, they are entitled to approach Bigfoot and offer him the buttons in return for one of the three potion ingredients. When all the ingredients of the potion have been obtained they can then make up the brew to give to Bigfoot to cure him from of Bigfootitis and return him to human form.

Well, there you have it, except in this instance when they had gathered all the ingredients they couldn't be bothered to make the potion and give it to Bigfoot. Tch! Woodcraft Folk eh? So, if I meet any of you puny humans this week you just better cut and run unless you've a bag of nice shiny buttons for me. Mmmmm....buttons!
Posted by clodhopper at 1:13 pm 3 comments:

Ben and I are off for a weekend in the wilds with the woodcraft folk. Apparantly I have to be Bigfoot in the wide game.
Blue Skies then.