I went to the Garden of Eden in the early 70’s - having steamed up the Shatt al Arab waterway. That’s the one they’ve been arguing about ever since the Shi’tes and Sunnis fell out in the 7th Century. It was dodgy then and is even dodgier now: one side or the other is bound to arrest you for straying across an invisible border.

We got off at Basra where the security guards were smelly and looked threatening. Lizards and heat and me crawled up the wall while they fingered passports and wondered if they could clap us in jail for something. Eventually we realised they just really really needed some dinars to oil the wheels of international diplomacy. Baksheesh.

Don’t know what bought that to mind today. Anyway, I do remember it was rubbish: a few date palms, some scrubby grass and lots of sand. I wouldn’t trade my allotment for it. There wasn’t even a shed. And some stupid rule about not eating apples. Bollocks. God was a perfect allotment committee chairman but a lousy landlord. Now if he’d said, “don’t eat the horseradish”, that would’ve made sense. I could understand that.

[pic of rubbish horseradish]
Posted by clodhopper at 6:39 pm 3 comments:

“In the digital world, transmitting information increasingly means making it known within a social network where knowledge is shared in the context of personal exchanges. The clear distinction between the producer and consumer of information is relativized and communication appears not only as an exchange of data, but also as a form of sharing. This dynamic has contributed to a new appreciation of communication itself, which is seen first of all as dialogue, exchange, solidarity and the creation of positive relations. On the other hand, this is contrasted with the limits typical of digital communication: the one-sidedness of the interaction, the tendency to communicate only some parts of one’s interior world, the risk of constructing a false image of oneself, which can become a form of self-indulgence.”

So….what is it then….a sharing of information or a one-sided interaction? Bless me internet….it is 50 seconds since my last digitisation. I have had lewd thorts, cussed in tongues and dissed religion something chronic and created 25 false idols of meself.

“Entering cyberspace can be a sign of an authentic search for personal encounters with others, provided that attention is paid to avoiding dangers such as enclosing oneself in a sort of parallel existence, or excessive exposure to the virtual world. In the search for sharing, for "friends", there is the challenge to be authentic and faithful, and not give in to the illusion of constructing an artificial public profile for oneself.”

Er…..parallel existence? Give into illusion? Artificial public profile? You looked in a mirror recently?

"Is there is a risk of being more distracted because our attention is fragmented and absorbed in a world "other" than the one in which we live?"

"In the digital age too, everyone is confronted by the need for authenticity and reflection. Besides, the dynamic inherent in the social networks demonstrates that a person is always involved in what he or she communicates."

“….It follows that there exists a Christian way of being present in the digital world”

So, there must be a Hindu, a Buddhist, an Islamic, a Zoroastrian way, right?

“First of all, we must be aware that the truth which we long to share does not derive its worth from its "popularity" or from the amount of attention it receives.”

MEMO: Benedict to Vatican IT. How come we only got 5 hits last month?

“I would like then to invite Christians, confidently and with an informed and responsible creativity, to join the network of relationships which the digital era has made possible.”

“The web is contributing to the development of new and more complex intellectual and spiritual horizons, new forms of shared awareness”

“Believers who bear witness to their most profound convictions greatly help prevent the web from becoming an instrument which depersonalizes people, attempts to manipulate them emotionally or allows those who are powerful to monopolize the opinions of others.”

Wouldn’t dream of it, would you?

“On the contrary, believers encourage everyone to keep alive the eternal human questions which testify to our desire for transcendence and our longing for authentic forms of life, truly worthy of being lived.”

As opposed to inauthentic forms of life not worthy of being lived…?

“I invite young people above all to make good use of their presence in the digital world.”

By learning what a thoroughly corrupt, despicable and evil cult of misery you lead? Good idea.

The Master and his Emissary - reviewed

The Master and his Emissary - The Divided Brain and the Making of the Western World.


In which Ian Mcgilchrist takes an interesting idea and stretches it to breaking point.

The Master and his Emissary tells an old tale......

The basic idea is that we have evolved with an asymmetrical split brain, the two hemispheres of which have different 'takes' on the world, different ways of 'seeing' reality, both of which are crucial to optimal functioning. The left hemisphere is more analytical, reductionist, particular, linear in viewpoint; it will help you break a problem down into its component parts, it will 'see' the detail, it can focus on a grain of food and pick it out against a background that looks similar. The right hemisphere takes a more global and overall view of things. It 'sees' context, it's aware of the surroundings - it's aware of the storm approaching and the predator behind those bushes; watching you while you eat the grain. It can see the big picture. It is holistic, empathic, emotional, connected.

Apart from the few wild places left, the world we've created is built by our brains interaction with the world. The cities, the cars, the credit cards, the shopping malls, the banks and the town halls, the theatres and the zoo. All of it. So what have we created? A mess, it seems: and the reason, according to Mcgilchrist, is that our brains are out of balance, the left hemisphere (the emissary), has taken over from the right hemisphere (the master), which it is now effectively suppressing and has taken over the reins, and fashions our lives according to its dictates.

To explore this idea, he takes us on an (enjoyable) and very detailed journey through neuroscience, history, anthropology, art - all of civilisation in fact. At the end, he paints an apocalyptic vision of what a world dominated by left hemisphere thinking would look like: not a pretty picture, to say the least. He looks (through rose tinted glasses, I feel) to times in the past where he believes the left and right hemispheres have been more balanced - ancient Greece (circa 600BC) for example. He states, without providing evidence, that this power shift to the left, is not as prevalent in India say, or in Japan. He seems to have a somewhat romantic view of these more right hemisphered societies, seemingly able to put to one side the vast social inequalities, grinding poverty, feudal hierarchies and religious divisions contained therein.

At the end, I don't think his thesis can be supported by the current evidence available. I think it is too soon to reach the conclusions he has. At the very end, he sais that he won't really mind too much if his theory turns out to be incorrect. I don't really believe him though.

Essentially, it is an old old story. Plato or Aristotle would have deemed it a battle between good and evil, between god and the devil, between reason and the soul.

Mcgilchrist re frames it into a battle between the left and right hemispheres of the brain, between the master and the emissary. vying for power and control. It's a great read, even if you don't buy into the theory....


There was once a wise spiritual master, who was the ruler of a small but prosperous domain, and who was known for his selfless devotion to his people. As his people flourished and grew in number, the bounds of this small domain spread; and with it the need to trust implicitly the emissaries he sent to ensure the safety of its ever more distant parts. It was not just that it was impossible for him personally to order all that needed to be dealt with: as he wisely saw, he needed to keep his distance from, and remain ignorant of, such concerns. And so he nurtured and trained carefully his emissaries, in order that they could be trusted. Eventually, however, his cleverest and most ambitious vizier, the one he most trusted to do his work, began to see himself as the master, and used his position to advance his own wealth and influence. He saw his master’s temperance and forbearance as weakness, not wisdom, and on his missions on the master’s behalf, adopted his mantle as his own – the emissary became contemptuous of his master. And so it came about that the master was usurped, the people were duped, the domain became a tyranny; and eventually it collapsed in ruins.
Posted by clodhopper at 1:23 pm 1 comment: 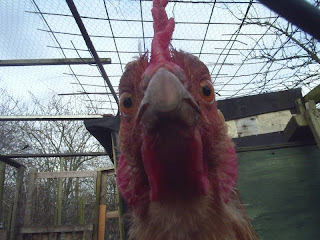 There's a slow rising mist over Hala beck and golden light from the sun as it peeks its head over a cloud bank. All the birds are singing like crazy: as if they know something. Everything looks a sort of golden green colour: the boughs of the trees, the walls, gates, fenceposts and sheds, even the greenhouse glass and sheets of corrugated iron; like everything has been painted with bacterial greenwash - I suppose it has been.

All the chikkins are in a fine perky, peckky mood. They rush out of the coop as soon as you open the door - it's funny - I call it the charge of the light sussex brigade. They've left a mountain of poop to clear up after our weekend away, but it's all good fertiliser which I will mix into the greenhouse soil when I dig it over.

Things seem simple and uncomplicated up here. I like the stillness and just sitting watching and listening to the birds and the warming sun lift the moisture off the damp grass in swirls of mist. I like not thinking sometimes; it's like a waking dream - you sometimes get it when you're playing music really well, and it just flows and feels effortless. Good days.
Posted by clodhopper at 10:50 am 2 comments: