What use is winter other than for firesides, mulled wine and stories?

On August 20 1612, ten people were hanged at Lancaster Castle for the murder by witchcraft of seventeen people. They are known the world over as the Pendle Witches.
What is not so well known is that Old Chattox (Anne Whittle), Old Demdike (Elizabeth Southerns) and her grandaughter Alizon were jolly keen gardeners……….and still are!

Old Demdike smoothed out her black smock. Her ‘familiar’ Tibbs, (at sundry times a fox or a hare or a little boy with black and brown jerkin), lay, now in the form of a black labrador, curled up cozily in front of the big log fire in the drawing room of Malkin Tower.

Old Chattox stood by the west window gazing through the smokey leaded panes out onto the side of Pendle Hill where a procession of men, women and children carrying ridiculous looking brooms and lanterns snaked their way up the winding path to the summit. Alizon came over to stand and watch. The children, pinkfaced in the wind, jumped out at each other from the rocky outcrops hooting and wailing and letting out piercing screams of delicious fright.

‘All Hallows’, muttered old Demdike, dipping into the fireside cauldron for another glass of warm spiced wine, ‘tis the same every year now’. Alizon turned from the window to face her grandma. ‘Do they celebrate our deaths then….up there?’

‘Them?’ Old Chattox snorted derisively, ‘they celebrate nothing!’ ‘Look what they do at Yuletide; they see nothing; feel nothing. They care even less.’

‘True enough’, old Demdike sipped her wine and scratched behind Tibbs ear. ‘Whither tonight then – this All Hallows?’ 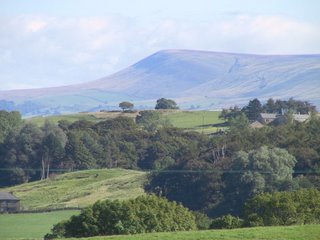 A shower of sparks drifted up as burning logs shifted and resettled. Alizon came over to squat beside Tibbs and pull his silky black ears, which he loved. She watched the sparks rise and settle on the sides of the chimney creating patterns of glowing, dancing red spots on the sooty face of the bricks. She threw on another log to make more sparks rise. Tibbs transformed into his boy form, sitting up and squatting companionably at Alizon’s side to watch with her, his blond hair glowing red-gold in the firelight. ‘I want to go back to Lancaster’, he said, his hand creeping into Alizons lap to hold hers. ‘It’s been long enough’.

‘Tosh’, grumbled Chattox, turning from the window and forking her fingers, ‘long enough is not long enough. I can still feel the rope round me neck!’ She walked to the fireplace joining the others and fingered a not-forgotten tightness at her throat.

Demdike watched Chattox approach over her gently steaming wine glass.
‘The mortals were stupid then and they are stupid now…..the centuries do not change that’. She gestured to the lantern lit procession on the hill outside. ‘Perhaps no more stupid there than they are here’.

‘Aye’, Alizon agreed, squeezing Tibbs hand, ‘we cursed that city well enough ‘er we left and some are there now that have learned and not a few that can SEE.’ Tibbs smiled now, encouraged by Alizons support. ‘And’, added Tibbs, ‘owd Tom grows a fine big pumpkin’. He looked up at old Demdike with the question in his eyes for it was she who would decide.

Demdikes eyes were now fixed on the fireplace and she was silent. The flames glazed her eyes till she saw far beyond them. Presently she sighed, drained the last of her warm red wine, and putting the glass down said simply, ‘We’ll go then.’

Old Chattox said nothing. It was pointless to complain, and besides, she was curious to see the old place after all these years. She too had a soft spot for ‘owd Tom’ who was kind and generous and whose pumpkins did make the finest soup in Lancashire, east, west, north or south, and that was saying something.

Alizon stroked the witchwood of her broom and there came the sound as of a strong wind in a living tree and the ash and hazel twigs scratched together and quivvered in anticipation. ‘Do you follow?’ she said, turning to the still boy-formed Tibbs. ‘I will,’ said Tibbs. ‘With me then?’ Alizon asked. ‘No, I will fly,’ said Tibbs, reluctant to break his fireside reverie. Tibbs stirred, and as he rose, he transformed into a large raven who’s feathers seemed to absorb every last drop of the now dwindling firelight. His raven eye flicked from Alizon to Demdike to Chattox, now all mounted and ready. ‘Away then,’ he said, rising swiftly and soundlessly into the moonlight above Pendle hill, where below, the revellers now circled a blazing summit fire.

They saw nothing, as usual.

I’d grown used to seeing him sat there between the shed and the greenhouse always gazing east across Hala beck and east again across the motorway that rumbles endlessly on, and east again across the Quernmore valley and then east again to who knows where? Not that gazing east is compulsory on our allotments, it’s just that if you’re prone to gazing, then that’s the direction to do it in. West would be boring….just a row of houses. North ditto. South…....a hedge. East has interest; a big sky; birds wheeling about above the beck; the felltops of Clougha and out over the Bowland forest to Amsterdam and beyond.

He sat on one of those old school chairs familiar thirty or more years ago; the ones with a tubular metal frame and a bit of moulded and varnished plywood to sit on and another bit to rest your back against. I remember dragging them stacked ten high, (to impress Susan Laker – who I fancied), across the school hall after assemblies or whatever. Remarkably, after all these years, his chair looks in good nick; not too much rust in the metal and the seat worn to a smooth, comfortable looking sheen after years of…....well, sitting.

No one seems to know for how many years he’s been sitting there soaking up the sun and the wind and the rain - though he’d drag the chair into the greenhouse if it came on too strong. Long enough anyway for the allotment to have cloaked itself round his being so he became the very soul of it and now he’s not there the soul seems to have gone out of it and the plot seems to be in mourning and is that possible?

His clothes wore him like the clay does its topsoil and so he blended into the plot and became indistinguishable from it so that some days you wouldn’t even register his presence at all till some small movement or other caught your attention: like scenery so familiar your brain filters the information and puts it into the ‘Take for Granted – Ignore Until Told Otherwise’ compartment of the brain wherever that is. I’m sure She Who Must Be Obeyed thinks I have a big one of those.

Whatever it is then, it must be serious to stop your easterly vigil so I will take it up for you then and wish you well. I hope you don’t miss the plot as much as the plot misses you. How bad can a dressing gown and slippers be? No, OK don't answer that.
Posted by clodhopper at 12:46 pm 2 comments:

Reasons to be Cheerful # 1 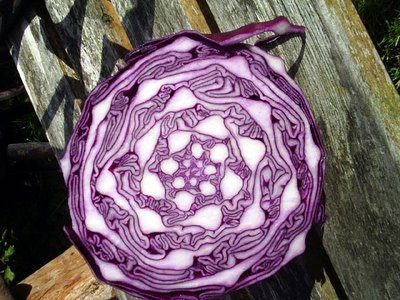 Scientists discover incontrovertible evidence of chaos theory and loop quantum gravity in the interior of a red cabbage on an allotment in Lancaster.
Posted by clodhopper at 5:16 pm 3 comments:

Despite the forkast wind and rain over the weekend we spent hours and hours in bright sunshine pulling spent crops, digging over and manuring beds, emptying the compost bins and mulching the strawberry beds and picking seed pods so the mice in the shed could have a jolly good feed. Don't know why the met is getting the forcast so consistantly wrong at the moment but I'm not complaining.

The tomatoes just kept on coming this year and have been wonderful. For those who may be partial to a bit of tomato sauce, this is a great way to use up a glut.

It is quite unlike any of the crap off the shelf varieties and the spices give it a subtle but delicious kick rather than putting the boot in so it still goes well with any number of dishes.
Posted by clodhopper at 8:00 pm 3 comments: