The man who came up with the above phrase has just been rewarded with the job of secretary of state for children, schools and families. So I guess he'll be making a lot of sense then. Do you think it has anything to do with allotments?

Meanwhile, Blair is off for some middle east envy and rumour has it he is about to join the Holy Roman Catholic Church of Apostolic Child Molestors who's Pontiff wined & dined and welcomed into the Vatican that Iraqi child mass murderer Tariq Aziz and even took him off for a private prayer vigil to Assisi. Obviously, as a member of the "one true faith" Tony should have no problems mediating between the militant islamic factions who would like to kill all jews, christians and secularists and torture all other moslems who practice the heretical 'wrong' version of islam. Catholisism, representing as it does, the one true God meanwhile needs to get rid of/destroy/undermine all other religions including islam and judy-ism. The Jews, who treat the Palestinians/Lebanese so nicely anyway, and who got the rocks straight from God in the first place and the nuclear weaponry from it's God-Fearing allies and have a wall to wail at as well will take on all comers. I think some poetic justice is about to come Tony's way.

Meanwhile I, infidel that I am, am off to buy some chickens in the firm knowledge that they will make more sense than all the politicians and theologians put together.
Posted by clodhopper at 11:10 am 4 comments:

Will the persons who visited my blog by googling:

please contact me and I'll do my best to help you.
Posted by clodhopper at 8:33 pm 2 comments: 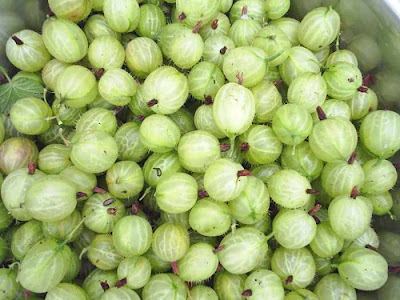 Now that's a cheery sight! It's goosegogs all the way to the centre of the earth.

We harvested our first batch of Pentland Javelin earlies at the weekend and they are just delicious served with a nob of butter and a sprinkle of salt. MMmmm.

Ben was bouncing off the walls a bit this weekend and when I asked him what was up he invented a good new word for it; he said he was full of 'plenergy' which is what happens when he hasn't had a playmate to help burn of his sometimes rather manic energy. Wish I had half of it! 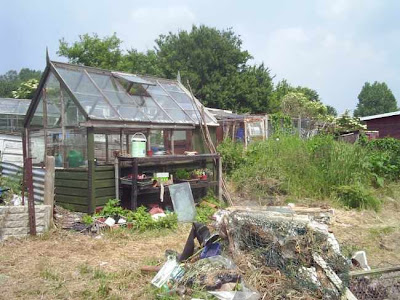 Here are a few of the second plot. The derelict greenhouse has been given a makeover and fettled with new glass and a couple of coats of wood preserver on the timbers. It's now back in active production with tomatoes and peppers planted. When we got it, it was, like the rest of the plot, buried in the six foot hight growth you can see in the background. In fact, the whole plot was covered in this and the job of clearing is going to take some time but at least we've been let off the plot fee for this year.

The amount of garbage coming off the site is problematic as it is right at the bottom of the plots and thus a long long way (uphill dammit) from the gate. There is a liquorice allsorts of broken glass, twisted metal, asbestos sheet, plastic detritus and what else and the pile gets bigger and bigger as more of the plot gets strimmed back to reveal yet more garbage. We need to get a trailer as far down the plots as we can otherwise it's going to take forever to clear. 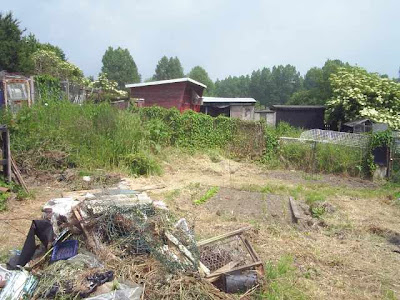 We've dug and planted out a couple of beds so there will be a bit of productivity out of the plot this year as well as what we get from the greenhouse of course.

The plot extends beyond the fence to the huts in the background. The big one on the left is a pigeon loft which has been sold and is to be taken away sometime in the next few weeks though I'll believe that when I see it. I reckon it'll more likely be there for three months. We'll see. The back bit is where the chooks will eventually live but I'm not planning to do any work on that until we're rid of the pigeon loft. Anyone got a spare weekend? We'll feed you, honest.
Posted by clodhopper at 8:37 am 6 comments: