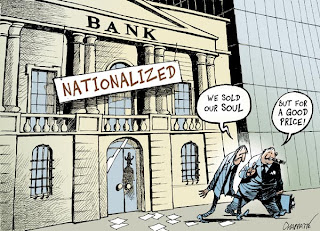 Both Cameron and Milliband are trying to position themselves as the reforming white knights of capitalism: they want a fairer, sharing, caring and responsible sort of capitalism, one which, sais Cameron “….recognises that people are not just atomised individuals, and that companies have obligations too.” And, “…is a genuinely popular capitalism, which allows everyone to share in the success of the market." Milliband is whingeing because Cameron is stealing the moral high ground from under his nose…."I welcome the fact that other leaders are coming onto the ground that I set out last September... about the need to tackle predatory capitalism." Adding that he [Cameron] would be judged "on his deeds and not his words". “Banks should not be able to get away with fleecing their customers,” he said yesterday with charming naivity, adding ….."Many people feel they are being ripped off in their everyday lives." No shit Sherlock!

Cameron and Milliband seem to think that playing the dumb innocents, who’ve only just come to realise how wikkid and unfair capitalism can be, and how they are both going to step in and change all that, is going to sit well with the electorate. I think maybe we’re a bit beyond all that…..twenty years ago….perhaps.

This is no passing ‘little local difficulty’ that a few political blandishments can reassuringly banish.

Since the collapse of Lehman Bros in 2008 the crisis has escalated from concern over the bankruptcy of banks (too big to fail), to the bankruptcy of sovereign states, despite all the frantic and desperate measures being undertaken, like bank bailouts and quantative easing [read: printing money] and the rest.

So, there IS a lot of wringing of hands and soul-searching going on (at least, there is amongst those politicians and economists who have a conscience, and who are not totally sociopathic). They are beginning to question the basic assumptions used in the economic modelling they use to determine policy; they are beginning to question the wisdom of having allowed a credit free-for-all to build up layer upon layer of both private and public debt – as though it ever made any sense, at all - ever.

Across the world, a gullible public are told of the inevitibility of reduced public spending, raised taxes, lowered wages, falling standards of living, pension reform etc etc, all to be accepted with a gritting of teeth and a tightening of belts, (because ‘we’re all in it together’, are’nt we?), while out of the Capitalist 1st aid box are dragged the stikky plasters of tougher financial regulation, debt reduction, bigger capital cushions for the banks to survive downturns, and other measures to make banks less vulnerable to crisis intervention.

One of the assumptions was that sovereign debt was without risk and so was a good source of credit – and that may be true up to a point - but in the case of the EU, (which was structured so that the sovereigns within it were no longer currency issuing authorities – the European Central Bank having adopted that role), they are in the difficult position of being hamstrung by the remit and powers given to the ECB by Europe. This is such a structural flaw in the EC that it may yet well kill the European project unless the ECB can be freed up to act in a way that, say, the Bank of England could do in dealing with a crisis in the pound sterling.

But, setting aside the origins of the crisis, you have to wonder whether the patience of the Germans and the French will crack at the profligacy and corruption of states like Greece and Italy and begin to seriously consider what is in it for them, whether the EU project is worth the candle, or whether they wouldn’t be better off pulling the plug and going it alone again. Who knows?

But that’s not really the purpose of this screed, which is to look at why capitalism was suited to the agricultural and industrialisation phases of society, but why it isn’t to the digital information age that we’re now in. That will be Tally Ho part the second, coming soon to a cash point near you.
Posted by clodhopper at 11:40 am