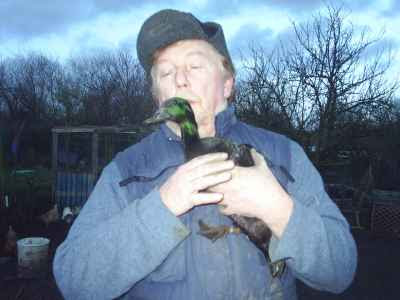 When I was a lad, we were only aware of the existence of a few of the martial arts, karate; ju jitsu; kung fu. Now they seem to have multiplied exponentially and you can do all sorts of exotic things like Bok Fo Do or Fu Jow Pai or Kuk Sool Won or Chun Kud Do, to name but a very few. As for myself, I did Aikido, which means Way of Harmony; supposedly one of the least aggressive and more defensive forms, a bit like Tai Chi Chuan with teeth. I enjoyed it until I did my knee in spectacularly; not practicing Aikido, but during a game of football - and it's never been the same since - boo hoo :-(

Thing about the martial arts is, well, they're just so....martial. Whichever way you cut it, they are about violence. Violence, sadly, just seems part of the human condition, doesn't it? From your pub brawl to your phospher bombs in Gaza and daisy cutters in Afghanistan.

On the plus side it's good aerobic exercise and they can teach balance, self control, coordination etc, and I'd like to think Ben would (using these techniques), stand half a chance up against the increasing number of der brains on the streets who seem to delight in beating people up for the sake of it, for fun, on a whim. 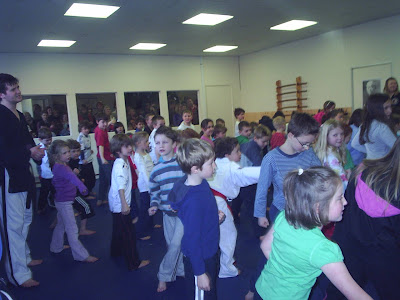 It's a nice little earner for Mr Dojo owner though isn't it? Have to be a bit wary of that you do. I mean, look at all these kids crowded into a grading session all paying fifteen squid a time to get their white belts and a 2c certificate. They are so bunched up there's barely room for a bad hiccough without twatting someone in the eye. When I complained about that the excuse was someone had made an administrative error and two sets of letters had gone out instead of one....scuse me. I let it go though as Boo would have been heartbroken not to get his belt today. He got it and he's happy. I just have to put up with him now coming at me like a windmill on speed yelling Hoi, Hoi, Hoi or Hhhuuuu Ya! while aiming devastating punches and disemboweling kicks in the general direction of me bits. I'm quite attached to, and fond of me bits though: they still have a bit of life left in them; so I do my best to remember whatever Aikido moves I can to protect them and yell Hoi, Hoi, Hoi and HHhhuyyy Ya to you to.... in as convincing and japanese a manner as possible. 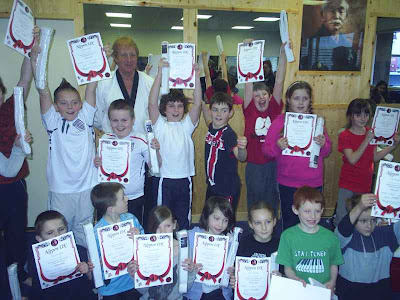 When we gets home I am at the kitchen sink washing and peeling potates to have with the evening meal. He opens the door and stands looking at me with this glint in his eye. I KNOW what is coming next. I make a mind bogglingly fast shift into the defensive stance of a master brandishing my peeler and look at him with steely yet calm yet stangely quiet and determined eyes.

I inform him in a deadly whisper of menace that he is looking into the eyes of a master of Spud Pi Ling.