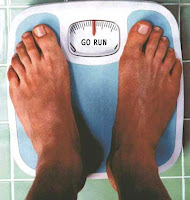 Isn't it great? Every day the media comes up with something else I've got to worry about. Now I've got to fret about obesity costing the NHS circa 7 billious pounds now and around 46 billious pounds (is that every year?) in about 40 years or so. A looming catastrophe, I am informed, potentially as great as global warming. Smeg - just when I was beginning to relax a bit too. OK, I know I can gaze gloomily at the digital readout on my bathroom scales which just sais 'to be continued' and yes, I know my body mass index is a bit on the high side but dammit, I am a middle aged man, we are supposed to be a bit pear shaped and anyway, shagging a skeleton (size zero I think they call it), holds no prospect of pneumatic bliss. 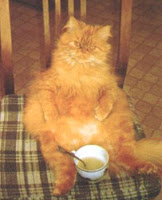 Also, my bony readers, when the Atlantic Conveyor turns off the gulf stream and Britains temperature plummets, you will not survive the bitter cold of winter as you will have no reserves of fat to call on and will be unable to make the necessary climatic adaptations required because you will be dead already, and in the meantime, we fatties are getting valuable fitness training carrying an extra 30 pounds of fat around all day long. Ergo, natural selection will kick in, and we will get shorter, fatter and happier. It is well known that fat people are just more smiley, happy go lucky, kinder, more forgiving, relaxed, gentle, better lovers.... and we don't get Anorexia either. It will be clear to my readers by now that I regard allotments as the solution to just about every evil from rap music to global terrorism. So if the govenment would care to throw some of that money my way, I will gladly give up my job sitting in front of a stupid computer in a stupid office all day and go and work up on the allotment more, thus lessening the risk of me making it all the way into the obese category.

I thinks it's called progress or something. I'll pass on that for the time being.
Posted by clodhopper at 10:51 am

Hmm, so our biology hasn't caught up with our lifestyle huh? Maybe we should assume a lifestyle, or at least diet and exercise, that is more suited to our biology. That doesn't mean Stone Age diet and hunting cattle in the fields, it just means not stuffing ourselves on fatty sugary foods that fall off supermarket shelves and into our shopping trolleys. Oh, and getting out of the armchair to change channels instead of using the remote all the time!

We can't use the remote since Ben poured water all over it. We have to get off our arses to change channel and....do you know what? It's REALLY irritating.