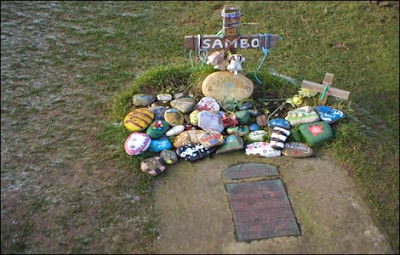 I still find it difficult to believe that this beautifully insignificant little city of ours was the fourth biggest slaving port in the UK. It is one (of many) uncomfortable historical facts that we must simply acknowledge and live with.
I don't though, really understand the current vogue for apologising for distantish historical events. Where would that logic take us? We would need a ministry of apologetics and a team of stuffed shirts with university degrees in sincerity working round the clock. Doesn't rattle my chain at all. Reparations though! Now that might actually be of use to someone. Is there anyone seriously offering to do this or is pious apology the order of the day?
A few miles up the coast at Sunderland point, we do have a rather poignant and permanent reminder of Lancaster's less than savoury involvement in the slave trade in the form of Sambo's Grave.

The story behind it (at least the one people like to tell), is a rather romanticised tale of a slave cabin boy, abandoned by his beloved ships master and pining away broken heartedly on the shore to be reunited with his captain. Bollocks. Not, I suppose, that some such couldn't happen, I just think the truth is much more likely to be a brutal and unpalatable one.
It's not a very sensible contribution to the debate just to feel crap about it all is it? Sometimes music helps pull me back a bit though, and I guess if anything remotely positive can be said to have arisen out of slavery then I guess 'the blues' might just come close. Not even sure of my ground there though either. 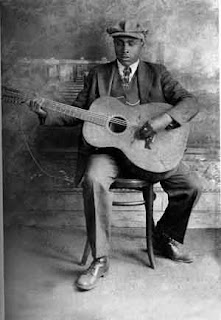 Anyway for what it's worth, here is my recording of Blind Willie McTell, a Dylan song about slaves, plantation owners, chaingangs, and fine fine blues singers, none of which apply to me; although I do of course work on a plantation of sorts and SWMBO likes to keep me in bondage ;-)

Blind Willie McTell mp3 4mgb
Posted by clodhopper at 6:19 am

I'm with you on this apologising for the past thing. When slavery was in full swing my ancestors were labourers being exploited by those same toffs that were profiting from slavery, but just in "slavery" here rather than the Caribbean. There might be some point to the toffs who inherited from them making reparation in a monetary way. They have been made to do it for the people in this country as the toffs "filthy richness" has dwindled and our social standing has vastly improved

What should be stopped now is the modern day "slavery" of multi-nationals exploiting the poorer levels of society, here and abroad. That would be a good way for the rich today to be saying sorry for the past! and preventing similar guilt in the future.

Hi Lilly....couldn't agree more but I'd not hold my breath waiting for an ethical multi national to appear.

I am a poet researching Sambo's grave for a piece which will be part of a performance based on slavery, and its legacy, in November.

I have also blogged entries on this topic, if you have the time and inclination, but the main reason I am writing is to say thanks for an incisive and well written post.

I was due to visit the grave a fortnight ago for inspiration, but was unable to, so your photo also helps me.

I love your writing, so I hope to revisit your blog at some point in the future!