And we'll all go together when we go...all suffused with an incandescent glow... 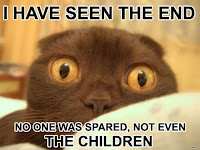 Or maybe not.
What happens in your head on Saturday 21st May at 6pm
local time when you discover that there’s no global earthquake, no
judgement day; you haven’t been Raptured up into glory and neither has anyone else?
What happens when you’ve pulled your kids out of
school, resigned your job, sold your house to buy into the wagon train of doom trundling around America bringing the '‘good’ news of damnation & destruction to everyone?
Do you stand around muttering ‘oh…..er……well’, and wonder what to do next? You’ve spent years preparing yourself for teh 2nd coming and He's stood you up.
You’ve already written off humanity as a bad job deserving of damnation and tribulation (but not you). Everything humans do is poisoned, sinful, loathsome in God’s eyes; you’ve no hope for the future, no faith in all the endeavours of humanity to progress, to get better, to live at all. All that is pointless and you want it to end next Saturday.... and it doesn’t. What happens in your head?
Was it a mistake in the math? It’s still going to happen, right? The Bible can’t be wrong on this can it? No, that's not possible: there’s just been a temporary postponement: armageddon is on hold...….wait….it’s just been revealed to brother XYZ that the new date is to be..blah blah blah and we’ve been blessed with more time to get the new date for the apocalypse into as many peoples diaries as possible.
Is that what happens? You retrench into some miserable little end time cult, growing ever more dissociated from reality; alive in the world, but not living in it, part of humanity but taking no part in it.
But all that’s for later. What do you feel as the great day approaches? Fear, trepidation, expectancy, transcendent joy? What do you feel for the unraptured, the damned: the ones that will be left behind to experience unspeakable levels of torture, terror and torment? They’re getting what they deserve, right? No need to feel bad for them.
And polls suggest that somewhere around 40% of Americans, (123 million people), believe in some such apocalyptic scenario, and many believe it will happen in their lifetime.
On one level this is funny, but on another it’s tragic - as well as bewildering: that so many can abrogate responsibility for humanity to some fantasy going on in their heads beggars belief.
The trouble is: the more they dream of heaven, the more likely becomes hell on earth.
Posted by clodhopper at 10:07 am

I plan to do nothing at all. Not even keep an eye open for the time it is supposed to happen.

Absolutely awesome, Clod. You sure nailed the inhumanity of the people devoting any energy at all to this nonsense.

It is the pitless abandonment of friends and family that most shocks me. As the big day approaches the only love that counts is God's love. The others are lost. Why aren't they all out frantically trying for last minute conversions? Why aren't they weeping for the loss of SO much once near and dear to them?

Watching Theroux's revisit to the Phelps's, the lack of familial love and concern was deeply saddening. These people are possibly at the low end of the empathy spectrum, possibly what are psychiatrically called "Boarderline or TypeB" personalities. As selfish as any would-be suicide.

I'll be taking my meal break at work. I plan on either rib tips or bbq chikiin. It's going to suck trying to get past the plexiglass to help my self.