Such a lovely few days of sunshine spent sowing tomatoes and sweetcorn and peppers and aubergine and whotnot. Then the ferret dug them all up as he has learned how to open the attic door and leap tall tables in a single bound. Oh well.

Nothing can dampen my spirits however, now that it is confirmed the Pope is coming for an official visit in September and that it will only cost us £20 million for the 4 days. It's only 5 mill a day, so really, quite cheap. I've so much been looking forward to the moral guidance he will issue to this country, infested as it is with women and homosexuelles and atheists and other ner-do-wells all clamouring for equality and shouting about discrimination all the time. I'm particularly looking forward to his sorely needed guidance to parents on child care issues. I do hope none of these hot under the collar types try to give him a hard time or to arrest him for crimes against humanity for the hundreds of thousands of abused children or the millions put at risk because of some silly notion that condoms can actually help prevent the spread of Aids. That would be too silly for words and I hope the government listens to all his advice very carefully and starts to run the country accordingly.

Just as I was basking in the suffused light of catholic insufferability and ethereal sactimonius self-righteousness; lo, did a passing strange cloud appear in the sky. 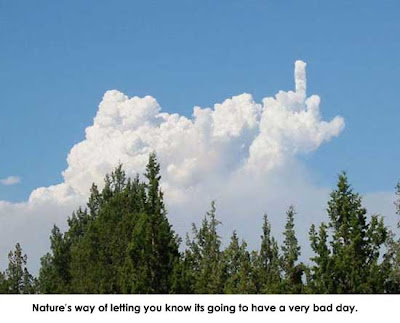 Posted by clodhopper at 9:50 pm